is a Blog about daily life and the products we find, use and need in our everyday lives. the-Daily Grind will bring you updates and honest reviews of recipes and food, clothing and fashion, personal finance and financial...
Read More...
Posted on February 11, 2016 by Tim Capper

Operation Pluto, an acronym that stands for pipelines under the ocean, was initiated following the famed Allied invasion of Normandy, France during World War II, with the first pipelines being laid in the year 1944. The operation arose from the need to supply petrol to the Allied forces as they entered into and advanced through France. Transporting this valuable resource from storage tanks in southern England to the forces in France required an innovative and tactically offensive approach, leading British engineers, oil companies and the armed forces to combine efforts and assemble undersea pipelines beneath the English Channel. 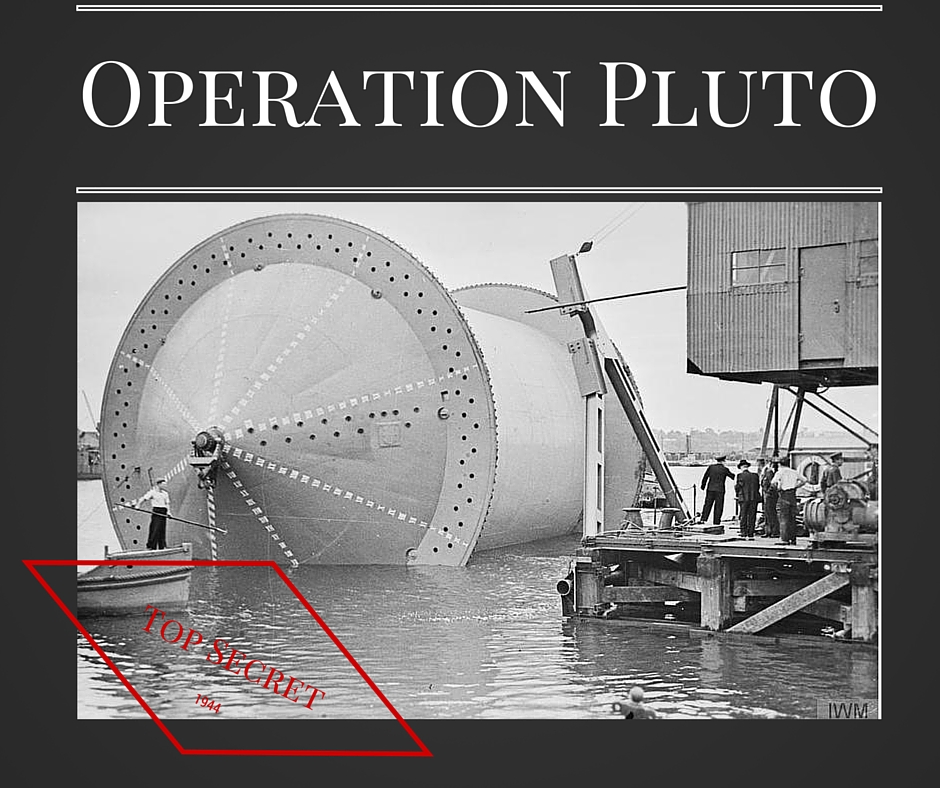 The Pluto project solved a crucial problem by overcoming previous petrol transport problems by creating an underwater petrol transportation network between the two countries. With prior efforts relying on either conventional tankers or ‘ship to shore’ pipelines, Operation Pluto alleviated problems of disorder from overcrowded beaches, allowed for freer movement of forces, weapons and supplies and made the entire process less vulnerable to bad weather, rough seas and attack by the opposition.

The original idea was conceived in early 1942 by the Combined Operations Experimental Establishment, referred to as COXE, a collective responsible for a number of top-secret projects and tasked with finding solutions to overcome stubborn problems and advance the Allied forces by any and all possible means. They were a group of essential problem solvers looking to halt anything that was impeding war efforts, including the problem of providing a steady supply of petrol from England to France. As the group considered various options, an idea emerged from the Chief Engineer of the Anglo-Iranian Oil Company, who suggested the use of existing submarine cable technology as the basis for an underwater petrol pipeline.

By June of 1942, the project began deep water trials, and after those were deemed a complete success, Operation Pluto was formally adopted into the plans for a full-scale European invasion. A project deemed ‘strategically important, tactically adventurous and industrially strenuous,’ it was a considerably challenging engineering feat. The original plan was for a network of lead pipeline, but with hundreds of miles of pipeline needed, the supplies of lead and manufacturing times for the piping proved to be prohibitive. Two senior engineers on the project, named Hammick and Ellis, suggested using steel pipelines as they had experience with this material and knew it to be sufficiently flexible when working with such expansive lengths.

The project now began using two different systems of piping; HAIS and HAMEL. The HAIS pipeline was a multi-layered flexible lead pipe and was named for the involved parties: Mr. Hartley, the originator of the idea, his employer, the Anglo-Iranian Oil Company, and Siemen, the company responsible for the design and manufacture of the pipe. The HAMEL pipe was a steel-based pipe, named for its creators; Hammick, the Chief Engineer of the Iraq Petroleum Oil Company, and Ellis, the Chief Engineer of the Burmah Company.

Stewarts & Lloyds of Corby, Northamptonshire, England, also known as Corby Steelworks, shifted the focus of the company during World War II to producing goods that contributed to the war efforts, as did most other steel companies of the time. Corby Steelworks produced tube for beach defensive systems known as Admiralty scaffolding, along with over 2.5 million tons of tube for war-related work throughout the six years of fighting. One of the more important jobs of the Corby steelworkers, however, was their involvement in the manufacture of the HAMEL steel pipes for Operation Pluto. 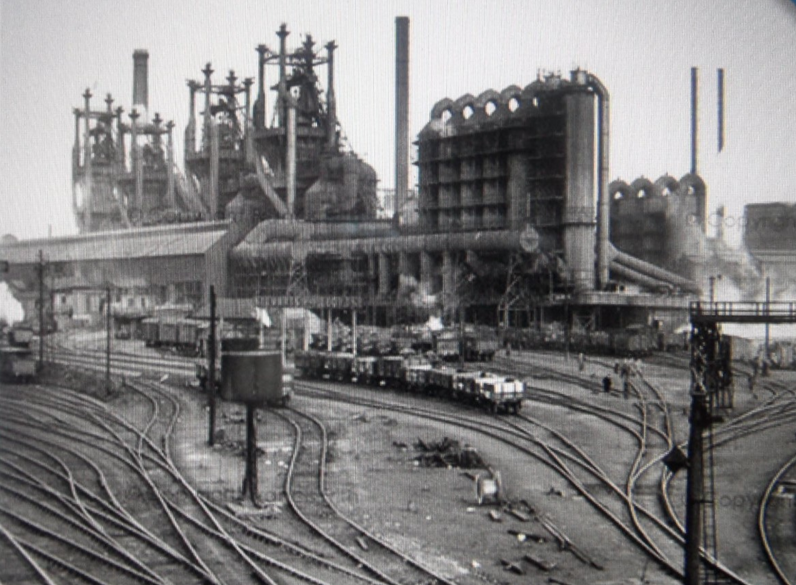 For a secret operation of such vital importance, success was essential and required an unmatched exactitude. Corby Steelworks produced specially designed machines that manufactured, cut and welded lengths of steel piping for Operation Pluto to a painstaking precision. The manufacturing process was done under a meticulous quality control system as it was imperative to ensure that the pipeline was reliable and operational under the high-pressure environment of the seabed.

Corby Steelworks led the high paced and painstaking manufacturing efforts for the steel pipeline for Operation Pluto. The company designed, built and set up special machinery that simultaneously performed a number of manufacturing operations. In a single pass, the equipment armoured and applied multiple layers of protective coverings to the pipes, yielding a fast output of finished piping. The fast pace and the precise methods allowed the company to produce the needed lengths of piping for the large-scale operation.

As with many wartime operations, secrecy was imperative and fundamental to the success of the Pluto program. The pipe systems were named HAIS and HAMEL as a surreptitious means, and all parties involved with the design, manufacture, construction and pipe-laying efforts were forbidden to refer to the project in terms of pipes or pipelines, and were encouraged to think in terms of cables rather than pipes to further the secretive nature of the project. 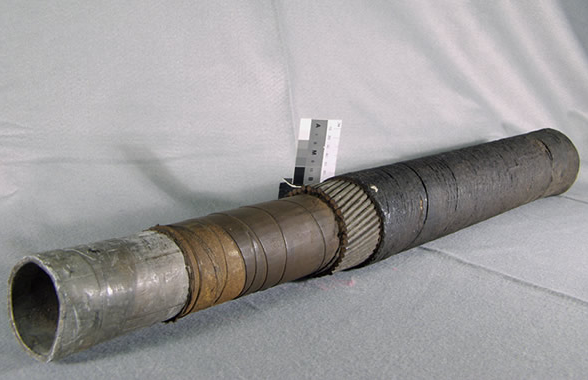 Corby steelworkers were not informed of any of the specifics of the job that they were performing day in and day out, and workers directly involved with the production of the steel piping knew it only as Project 99. Corby Steelworks was always in danger of being bombed by opposition forces looking to demolish the plant’s blast furnaces and hinder the Allied efforts. Steelworkers involved in this crucial operation learned years after the war’s resolution just how important a role they played in helping the Allied forces secure victory.

Shortly after D-Day, the pipelines were operational and a constant flow of petrol beneath the English Channel was meeting the heavy demand of the advancing Allied armed forces. The pipelines were essential to the outcome of the Allied troops, by creating the necessary momentum required for victory. Both air and land forces benefitted from the innovative method of getting a consistent, unimpeded supply of petrol to fuel all operations. 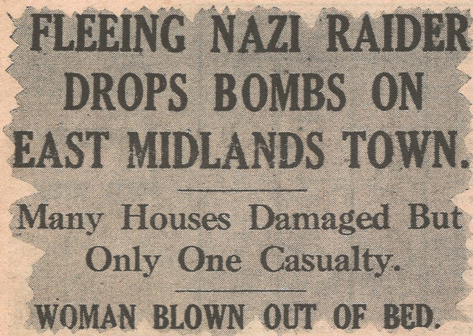 An exhibition at the Corby Heritage Centre examines the essential role that the Corby steelworkers had on Operation Pluto. The exhibit showcases original artefacts from the war era, as well as objects made from original sections of the Pluto pipeline. The centre will screen a locally-produced film that uses modern and archive footage to reconstruct the story of Pluto.

The public can further explore how the combined efforts of the Corby steelworkers and engineers involved in Operation Pluto provided the foundational knowledge for modern seabed pipe laying techniques and forged a new path for innovation.