Countries in this category include those that are emerging from underdevelopment. Emerging economy countries include those in Asia, not including Japan, Africa, Eastern Europe, Latin America, Russia and the Middle East.

India is one example to look at as an emerging market. It illustrates how a large company like Apple uses a highly focused strategy to stake out market share in an emerging economy.

Out of nearly 30 countries that are labeled emerging markets, India is considered the second best. In the 1990s, the Indian government and its financial sector set in place various economic liberalization policies that were friendly to business and investors. This system helped to grow the Indian economy.

These policies set up an emerging market that invited more competition. That competition created a higher per capita income, a growing middle class, an increase in foreign investment, a higher standard of living and the construction of a modern infrastructure. All these factors help a country emerge from Third World activities like subsistence farming and exploitation of natural resources.

India is considered one of the globe’s fastest growing economies. Its GDP growth rate has averaged nearly six percent in the past two decades. This makes India an attractive emerging market for investors. Here are 10 quick facts about India that bolster its claim as the second fastest emerging market in the world:

* India has a labour force of 487 million workers.

* It is the tenth largest importer in the world.

* Wages have doubled in the first decade of the 21st century.

* The consumer market will be the fifth largest on the globe by 2030.

* More than 400 million Indians have climbed out of poverty since 1985.

* The financial market sophistication ranks No. 17 in the world.

* The telecommunications industry is the fastest growing in the world.

* The economy is projected to grow at an annual average rate of eight percent over the next 40 years.

* It’s projected that India will be one of the youngest emerging market countries in the world by 2030 with an average age of 31.

With these impressive statistics signaling that India is about to make a run as the top emerging market economy, companies are looking to India as a country to set up shop to meet the incoming economic and demographic wave. Last month, Apple announced that it was reconsidering its emerging market strategy and decided to expand its presence in India.

Apple introduced the iPhone in India four years ago. The company has started an aggressive marketing campaign that offers Indians entry into the Apple smartphone experience for $93.

Apple is playing catch-up with Samsung that dominates the Indian market with cheap cell phones, holding a 40 percent share of cell phone sales. Apple needs to make up ground to catch Samsung, and emerging markets may be one place to do that. Initially, the strategy seems to be paying off.

In the last half of 2012, Apple added two distributors to sell its iPhones. With the exception of China, Apple sells its iPhones in advanced markets, so this venture outside its customary markets was a first for Apple.

Well, the gamble paid off. Analysts said that Apple increased its sales of iPhones in India by nearly 300 percent. In the last quarter of 2012, Apple shipped 250,000 iPhones to India, up from 90,000 in the previous quarter.

Most Indians can’t afford dollar-priced smartphones, but the monthly payment scheme that Apple began offering last month has customers lining up to buy the expensive phones. In India, the pricey $800 iPhone will cost the average Indian worker nearly two months of wages. However, Indian analysts are saying that the desire to own a status-symbol iPhone is there. 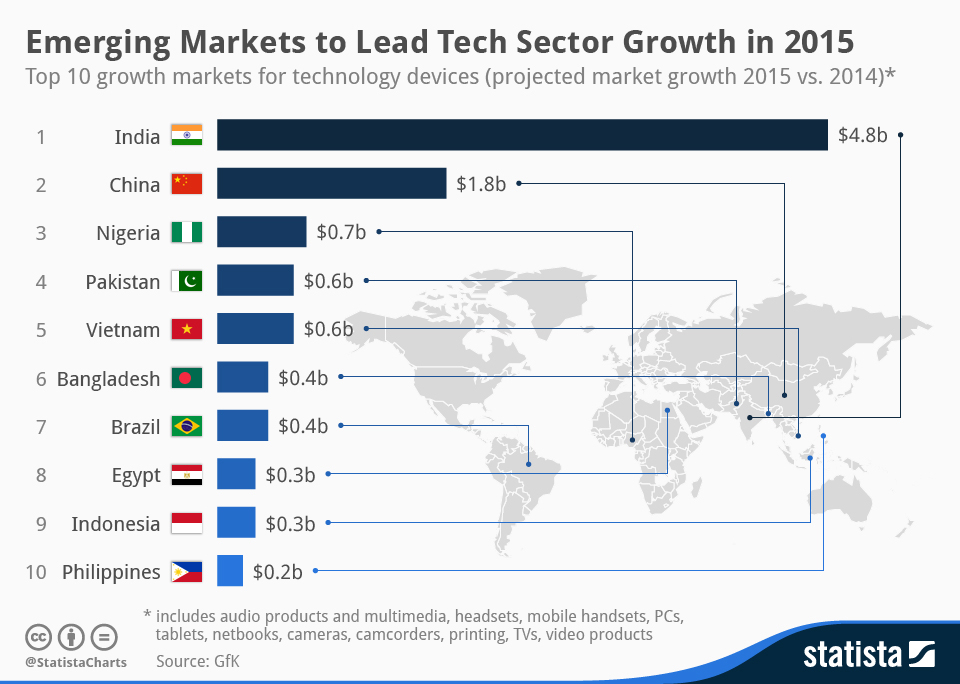 India is the No. 2 cell phone market based on numbers of users. Apparently, that emerging market number was too juicy for Apple to pass by. Smartphones make up only about 10 percent of the cell phone market in India. Unlike in the United States, telecommunication companies do not subsidize cell phone sales. Indians must buy their phones at the going market rate.

The numbers show that Apple has only a five percent share of the Indian market. However, projections from the research firm IDC show that the smartphone Indian market will more than quintuple, from 19 million devices in 2012 to 108 million by 2016. That number, for Apple, was likely the impetus for the company to jump into another emerging market country.

Some analysts say that the best way to penetrate emerging markets in Asia is to offer a cheap smartphone; however, Apple believes that a cheap hand-set would eat into existing demand and take a bite out of Apple’s margin. The Apple campaign, then, is an effort to convince the Indian who pays 12,000 rupees for a cell phone to invest 45,000 rupees for a top-of-the-line iPhone.

The Apple story illustrates why companies are intensely watching emerging markets like India. The opportunity to increase sales and company profits by selling to hundreds of millions of consumers who are earning more money are reasons why emerging markets are so attractive.